A couple of weeks ago I went to the Lillet St. Sunday conquers Santa and the Martians session at Dr. Sketchy NYC. The session was held at the newly renovated Slipper Room. The Slipper Room is beautifully decorated and has plenty of tables which was great for keeping my art supplies and drink safe from spilling. Even though I felt a little rusty it was great to get back to drawing and back to Dr. Sketchy’s after being away for a couple of months. 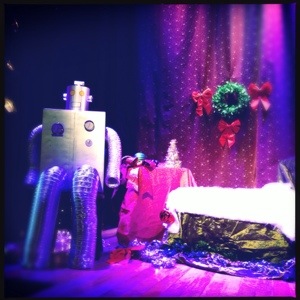 The set for the session

Looking up at the amazing tin ceiling 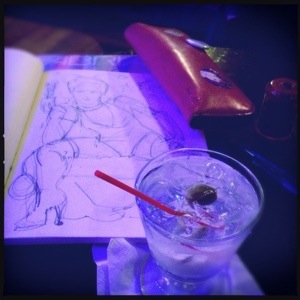 Some fun drinking and drawing!

During 2012 I had the opportunity to draw some really fantastic models at Dr. Sketchy’s in New York and New Jersey. Here are some of the highlights:

Raquel Reed At Dr. Sketchy NYC. (I was also fortunate to have her do my make up at a local MAC counter in New Jersey.) 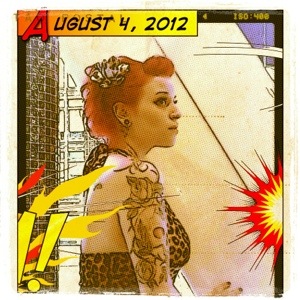 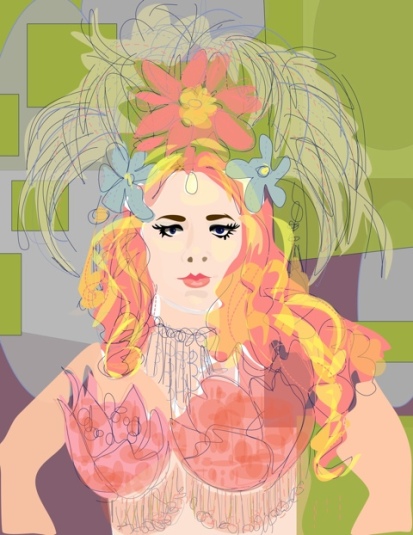 This is a portrait of Amber Ray from a Dr. Sketchy session at the Bowery Poetry Club in NYC. You can see some of my drawings from that session here.

Last week I went to the Dr. Sketchy session in New York featuring burlesque performer Amber Ray. She was dressed in her lotus blossom costume. She had a beautifully colored head dress and her wig was a wonderful shade of pink.

Amber Ray was one of the very first models that I drew at Dr. Sketchy’s at the Slipper Room. Since then I have drawn her at several Dr. Sketchy’s sessions including the Art Monkey’s Ball and a private Marie Antoinette session at a secret location in New York. 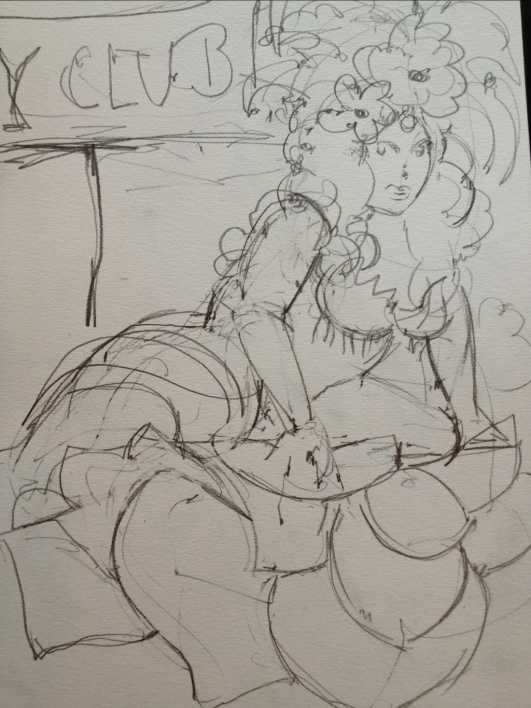 This is a portrait of Go Go Amy at the Bowery poetry club from a Dr. Sketchy session a couple of weeks ago. Here are some drawings from that session.

This portrait was done using the ink pad app and then also using the ArtRage app to add the watercolor paper texture. I also added in some textures using PicGrunger and Halftone.

I had a great time drawing at Dr. Sketchy’s featuring Burlesque performer and Pin Up model Go Go Amy. This was a real “old school” Dr. Sketchy’s session without any elaborate theme, but I always feel that I get better drawings at these types of sessions. I had not been able to go to Dr. Sketchy’s for the last couple of months and I really missed it.

This was one session where I wish I was able to take photos because Go Go Amy had beautifully colored costumes. Some of the short poses at the beginning featured her flaming pasties. Go Go Amy is part of a traveling Burlesque troupe called “Pretty Things Peep Show” that travels and performs around the country. They have a KickStarter going on until April 11th to raise money for a new tour bus. If you are interested in Burlesque you should definitely check it out because they have some pretty neat incentives.

One of my favorite characters that Scarlet Stepford “cosplayed” at the Dr. Sketchy NNJ session at Blick Art Materials was Zatanna. Zatanna is part of the DC Universe and has been part of several cartoons and tv shows like Smallville. I looked up the character on Google and found that she is very popular with cosplayers and found a lot of pictures of various people dressed like her.

In these two pictures I used a combination of Sketchbook Pro and ArtRage on the iPad. I was experimenting with different “brushes” in Sketchbook Pro, especially the paint splatter brushes and another brush that creates various sized circles. I imported the Sketchbook Pro artwork into ArtRage to give it a more textured, painterly look using the flat oil brush.

Through the Lava Lamp
Create a free website or blog at WordPress.com.